Aloha, peeps.
We're back... for a bit.
StoryTeller's been busy with school and hasn't had much time to hang out with us,
BUT
she was home this weekend and was finally able to go to AGP for the first time since Gabriela came out in January!
A lot of stuff has happened with AG in the past month and a half,
and we have opinions.
Oh, yes, we have opinions.
Let's get started!

Read more »
Posted by StoryTeller at 9:02 PM No comments: 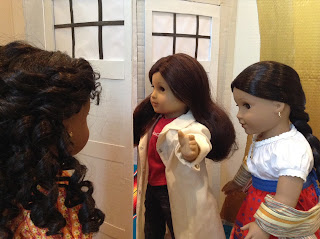 All Aboard the TARDIS! --Josefina's Story Continues 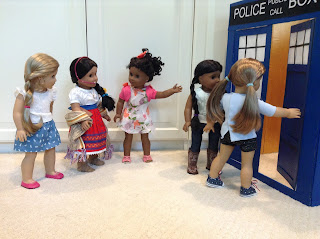 Cecile:  This is the TARDIS, Josefina!
McKenna:  Oh good, it looks like Keiko's already booting it up for liftoff.
Josefina:  It... it looks like a big blue box...
Cecile:  Step inside, and you'll see!

Read more »
Posted by StoryTeller at 7:52 PM No comments:

How to Build a Doll TARDIS, Part 2: The TARDIS Console!

All right, now that our TARDIS is complete,
we have to have some way to tell it when and where to go!
We need a console!
And it's not --quite-- as complicated to make as it sounds!
And it also easily comes apart in pieces for storage, too! 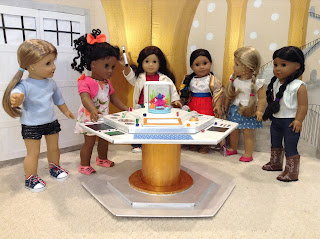 Want to build your own TARDIS console?
Read on to find out how!

Read more »
Posted by StoryTeller at 8:20 PM No comments:

How to Build a Doll TARDIS, Part 1: The TARDIS Box

So, it has been mentioned before on this blog that Keiko and Company have their own TARDIS.
Up until this point, I didn't actually have a TARDIS for them,
but I had plans to make them one eventually.
(Actually, I had plans to make it over spring break,
but didn't)
Well, given the recent development with Josefina's mysterious arrival,
as well as the fact that summer vacation has just begun,
I decided it was time for their TARDIS to be realized.
But I didn't just want a large blue-painted box for them.
First of all, that takes a lot of space to store, and I don't have a lot of space,
so I wanted it to be able to fold flat (well, almost flat).
And not only did I want it to be able to fold flat, but given that it's a TARDIS,
it also needs to be BIGGER ON THE INSIDE.
So, being the geniuses that we are, we devised a design that accomplished both goals
and turned out fantastic, if we do say so ourselves.
And since I know I can't be the only person out there with dolls who love Doctor Who,
I took pictures of the process so anyone else who wants to build their own TARDIS can make one of their own. 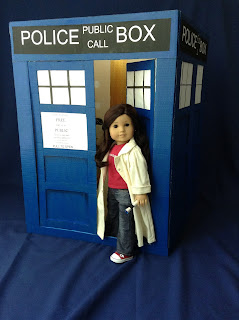 Want to see how we did it?  Click to read on and find out!
(Also, given that this is a how-to post of an intensive craft project,
this post is VERY photo-heavy.
Ye have been warned.) 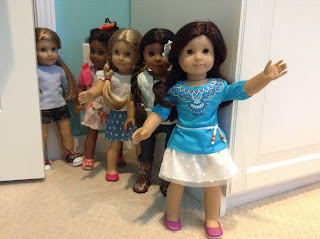 Keiko:  Whew, is it hot out there today!
Kaya:  I'll say.  Steps High was so sweaty that I could smell her from ten feet away.  And let me tell you, horse sweat stinks.
Lizzy:  I'm so glad it's nice and cool in here!
McKenna:  Oh, as if you should complain, Lizzy.  You were sitting on the deck drinking lemonade with Cecile while I was weeding!
Lizzy:  That's my POINT, McKenna-- it's too hot to even just sit outside!
Cecile:  Be nice to your sister, McKenna.
McKenna:  *Sigh*
Read more »
Posted by StoryTeller at 10:46 PM No comments:

Keiko:  Aloha, humans.
Keiko here.
Given that The Human apparently has decided that these things called "work" and "school" are more important than working on this blog,
I have taken it upon myself to let you all know that we haven't dropped off the face of the Earth or been abducted by aliens.
(Though if the Doctor showed up to abduct me, I wouldn't object.
Especially if he let me pilot the TARDIS and choose our destination.) 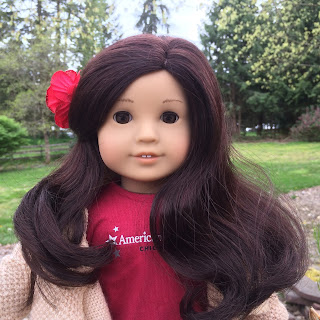